There’s a generational change starting, and we need to talk about it

NZABC submitted an Opinion to NZ Herald in response to the wider discussion about the Patrick Gower ‘On Booze’ documentary and panel discussion (on TV3 June 14 and 15 2022). This was not published.

As Patrick Gower recently led us through his personal journey from heavy drinker to sober and sensible (“On Booze” documentary and panel – TV3), there was little space for a deeper discussion of the actual facts about drinking in New Zealand. A quick examination of the official data tells us that the old Paddy was in the minority, and the new Paddy has joined the place where most of us already are.

Here are some of those facts from government sources –

Young adults are showing the rest of us the way with more and more drinking less or not at all.[v]

It’s not that we’re all perfect drinkers – far from it – there is still a lot of work to be done to shift the other Paddy’s out there into better drinking habits or not drinking at all. But there is definitely a generational shift happening in our drinking culture, and the real challenge is to figure out what’s fuelling it and accelerate the heck out of it.

Of course, there are some hints – the rise in the value of wellbeing, drinking no longer forming the centre of a social outing but as an adjunct to it, and being intoxicated increasingly being seen as unacceptable, antisocial behaviour. If we can create programmes that support these cultural changes, particularly with younger drinkers, then we’ll have a generation of parents modelling better drinking behaviours with their children. It’s a practical foundation because parents are still the greatest influencer on young people’s decisions around alcohol and how they end up drinking as adults.

As a nation, we are also becoming more conscious consumers; we’re changing what we drink and how we drink toward the ‘no, low, slow movement’, as seen through three responsible drinking trends:

Public awareness campaigns and social change initiatives such as Cheers NZ and Alcohol&Me are also key to providing tools and information to help people better understand alcohol, how it affects them, what a standard drink is and why it is important to count your drinks, and ultimately help people make better decisions around alcohol.

But, conversations about changing our drinking culture by focusing on why things are improving and amplifying the parts that make a difference is not always a popular topic. A common narrative is to focus on broad-brush law changes to restrict or ban certain things that impact all drinkers, yet these fall well short of targeting those who drink harmfully.

That doesn’t mean changes to regulations are not needed, but to say we need to ban advertising, artificially hike prices, cut the number of alcohol licences and reduce hours will magically mean harmful drinkers will change their ways just doesn’t stack up. Sure, overall consumption may fall, but that’s because the reasonable consumer might choose to drink slightly less – not so much the harmful drinker.

When you look at it closely, since 1999, when our liquor laws were deregulated, the amount spent on advertising has gone up, we’ve gone from 3,000 to 11,000 on- and off-licences and trading hours have generally increased. Yet, we are drinking 25% less per capita. And, artificially increasing the price would be difficult to accept when you consider that Scotland has tried it but found in a recent extensive study that doing this had no impact on harmful drinking.

Misinformation and scaremongering will also do little to help facilitate positive change. The $7.8bn ‘cost of harm’ figure often quoted is simply inaccurate and has been discredited by independent economists because it omits any social, health or economic benefits and contains several key miscalculations.[viii] Ministry of Health data also shows that the areas of Auckland often cited as being the most egregiously impacted by alcohol actually have some of the lowest hazardous drinking rates in New Zealand.[ix] [x] Research also shows that all things being equal, light to moderate drinkers live longer than those who don’t drink at all because of the well-known cardiovascular benefits of sensible drinking.[xi]

Patrick Gower’s journey will inspire some Kiwis to make meaningful changes to their lives. Still, more widespread changes will never be achieved by banning advertising, increasing prices, reducing licenses, or removing alcohol from supermarkets. Change requires an all-of-society approach – central and local governments, healthcare and education providers, communities, families, individuals, and the alcohol industry – each playing their part and engaging in open, honest conversations. This needs to be underpinned by targeted education and campaigns to educate young people on alcohol-related harm, encourage moderate consumption, empower people with tools and information to make better decisions, and accessible support for those who need it.

Graph 2. Litres of Alcohol Per Head of Population in New Zealand

Recorded alcohol consumption among adults, 2007 and 2017 (or nearest year)

Younger adults are following global trends of drinking less. In young adults aged 18-24 years, the number of people drinking is down -2.8% from 89.1% in 2006/7 to 86.3% in 2020/21. This generation is more health and well-being conscious and looking for “better for me” beverage options that are no sugar, low-carb, or no- or low-alcohol. 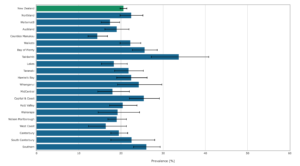 1.2.3.1 Cardiovascular diseases Numerous epidemiological studies have observed a complex relationship between both the volume and patterns of alcohol consumption and the occurrence of cardiovascular diseases (Roerecke & Rehm, 2012; Klatsky, 2015; O’Keefe et al., 2014). Specifically, volume and patterns of alcohol consumption have been shown to increase the risk of hypertensive heart disease (Taylor et al., 2009; Briasoulis, Agarwal & Messerli, 2012), cardiomyopathy (Lacovoni, De Maria & Gavazzi, 2010), atrial fibrillation and flutter (Kodama et al., 2011), and haemorrhagic and other non-ischaemic strokes (Patra et al., 2010). The relationship between alcohol and the onset of ischaemic heart disease or ischaemic strokes is complex; people who consume low-to-moderate amounts of alcohol and do not engage in irregular heavy drinking have a lower disease risk, while people who engage in irregular heavy drinking or who consume higher volumes of alcohol have a higher disease risk (Roerecke & Rehm, 2010; Leong et al., 2014; Guiraud et al., 2010; Roerecke & Rehm, 2014).

Decades of epidemiology have shown that the relationship between alcohol consumption and mortality is J-shaped. At moderate rates of consumption, mortality risk falls below that of a teetotaler/abstainer and then rises, exceeding that of a teetotaler at around 30-40 units per week. The exact shape of the curve varies depending on your criteria for inclusion, but the basic conclusion is always the same: moderate drinkers live longer than teetotalers.